The Microbiome and Gut-Brain Connection 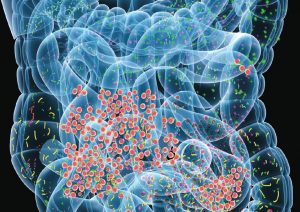 The human microbiome is made up of billions of bacteria, viruses, archaebacteria, and fungi that live within our intestinal tract and elsewhere in and on our bodies. These internal residents help us in many ways, some of which scientists are just discovering.

HHRA scientists are concerned about the widespread use of pesticides and animal drugs that kill bacteria, including the most heavily used pesticide in world history: glyphosate-based herbicides, aka Roundup.

That’s right, glyphosate is an antibiotic!  The world’s #1 herbicide works by acting on the Shikimate pathway, an important process that only occurs in plants – but also in many of the tiny organisms that make up our microbiome.

Why does the microbiome matter?

Food is the fuel that nourishes us. It supports the rapid growth of newborns as they progress through childhood and the teenage years. But for this to happen in ways that maximize a child’s chances for a long and healthy life, the stomach and GI tract have multiple miracles to pull off on a daily basis. It must extract the nutrients from our food and deal with excesses and inadequacies in nutrient intake, while also helping the body metabolize and excrete possibly dangerous nasties in food.

The miracle worker is not a Dr. Oz behind the curtain. It is the billions of microorganisms that make up our personal microbiome. The miracle worker is the numbers and health of our gut bacteria, and the diversity and balance in their numbers, that separate health and wellness from sickness and all sorts of problems in how our brain, immune system, and metabolism work.

This is why whenever a doctor prescribes an antibiotic to treat an active or potential infection, one of the big worries is that the drug will disrupt the mix of bacteria in the GI tract by killing off bacteria — except those already resistant to the bacteria. Such selective survival can dramatically disrupt balance in the human microbiome, and like a bug in a computer’s operating system, create all sorts of havoc that can be very hard to trace to its real source.

Is the same thing occurring when the antibiotic glyphosate hits our intestinal tract? HHRA scientists hope to contribute to ongoing efforts to help find out.