Dicamba and 2,4-D Herbicides: Use, Challenges, and Risk

A Closer Look at Challenges and Risks

By 2000 most soybean and cotton farmers had adopted the Roundup Ready (RR) weed management system. Soon thereafter, so did corn, alfalfa, and sugar beet growers. The RR system was simple, robust, and effective.

Roundup Ready crops are genetically engineered to be tolerant of post-emergence applications of glyphosate-based herbicides (GBHs). Farmers planting these GMO seeds can spray a GBH – broad spectrum herbicides that kills most growing plants – over-the-top of crops, killing most weeds and leaving the crop unharmed.

Rapid adoption of the RR system led to huge reductions in many widely used herbicides and unprecedented increases in applications of GBHs, as shown in Figure 1. Factors driving the remarkably rapid increase in the use of GHBs are discussed in the 2019 paper, “Trends in Use of Glyphosate Herbicide in the US and Globally” by Chuck Benbrook, HHRA’s ED. 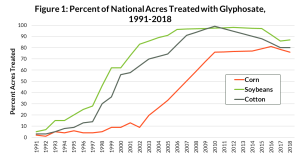 But as many weed scientists had predicted, excessive reliance on GBHs triggered the emergence and spread of many glyphosate-resistant weeds, as shown in Figure 2, and described in the Pest Resistance section on this site.

By 2010 it was clear that excessive reliance on one weed-management system – Roundup Ready – and one herbicide (glyphosate) – was fueling the emergence and spread of glyphosate-resistant weeds across the Midwest and in cotton-growing regions.

The spread of glyphosate-resistant weeds forced farmers to spray additional herbicides, more often, and at higher rates. It drew farmers onto a herbicide-use treadmill that assured accelerated emergence of newly herbicide-resistant weeds, higher costs for farmers, and more human exposure to herbicides.

The pesticide-seed-biotech industry responded to the spread of glyphosate-resistant weeds by developing a set of Next Gen Pesticides, including Monsanto’s ExTend system – GMO soybeans and cotton bred to be tolerant of both glyphosate and dicamba.

The commercial introduction of Next Gen GMO seed-herbicide “technology packages” was the catalyst leading to The Heartland Study, HHRA’s flagship research project.

Here we provide more information on the history, uses, exposure, and regulation of two phenoxy herbicides – dicamba and 2,4-D – and associated Next-Gen herbicide-tolerant crops. These herbicides have been used for over 60 years and can pose significant risks to trees and plant-life, ecosystems, and human health.

We provide easy access to key sources of information and insights into the impacts of rising use of 2,4-D and dicamba herbicides in the nation’s Heartland, including the first data available anywhere in the world on changes in dicamba levels in the urine of pregnant women as a result of EPA’s approval in 2015-2016 of dicamba-tolerant crops and associated herbicide formulations.

History, Use, and Challenges