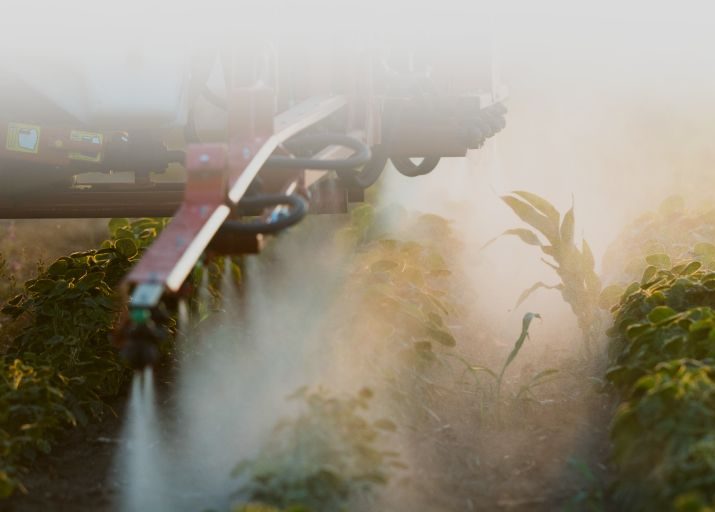 Weed management systems are failing due to overuse of herbicides triggering the spread of resistant weeds.

Weed management systems are failing due to overuse of herbicides triggering the spread of resistant weeds.

In the late 1990s Wisconsin soybean farmers eagerly adopted the Roundup Ready (RR) system of weed management. About 40% of the State’s soybean crop was planted to RR soybeans. On 70% of these fields a single application of Roundup achieved season-long control, while 30% of these acres needed a second application.

Ten years later in 2010 the average soybean field was treated with 1.7 different herbicides, and almost all soybeans were Roundup Ready and sprayed with glyphosate. 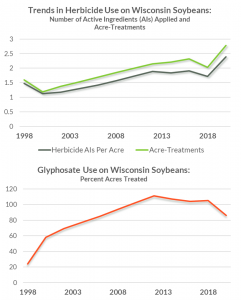 Fast-forward to crop season 2021 and the average WI soybean field will likely be treated with about three different herbicides, and on most fields, at least one herbicide will be applied twice.

This rising herbicide use is triggered by the spread of herbicide-resistant weeds. On many farms, producers are contending with three different resistant weeds in some fields. The trend is sharply upward, with no end in sight.

Back in the 1980s and 1990s, the pesticide industry invested heavily in agricultural biotechnology. Monsanto and other companies discovered ways to alter major crops like soybeans, corn and cotton so that broad-spectrum herbicides like glyphosate could be sprayed on growing crops, killing weeds in the fields, but leaving crops unharmed.

In almost a heartbeat beginning in 1996, weed management across the Midwest went from one of the most perplexing and costly challenges farmers face every year, to one of the simplest. Roundup Ready technology took over the soybean, corn and cotton herbicide markets. Adoption rose to well over 90% of planted acreage in just 10 years, and the sales of all other herbicides plummeted.

In almost a heartbeat beginning in 1996, weed management across the Midwest went from one of the most perplexing and costly challenges farmers face every year, to one of the simplest. Roundup Ready technology took over the soybean, corn and cotton herbicide markets. Adoption rose to well over 90% of planted acreage in just 10 years, and the sales of all other herbicides plummeted.

But, weeds are by nature adaptable. The selective pressure created by this phenomenal success of the Roundup Ready technology “package” led to the first-ever, well documented glyphosate-resistant weeds in a Delaware soybean field. This historic milestone occurred in 2001, after five years of continuous use of glyphosate. By 2004 two serious, economically damaging glyphosate-resistant weeds were undermining the profitability of cotton and soybean farms in much of the Southeast.

By 2010 glyphosate-resistant weeds were spreading nationwide, forcing farmers to spray additional herbicides, more often, and at higher rates. Yet none of these flashing red lights was enough to get the herbicide manufacturers, or EPA and USDA, to take the needed steps to embed proven herbicide-resistant management practices onto herbicide product labels, where they belonged all along.

Over 10 years ago weed management specialists at the University of Wisconsin-Madison, and indeed throughout the land grant university system, began recommending adoption of Integrated Weed Management (IWM) to reduce the need for herbicides, and most urgently, back off the selection pressure on weed populations from one-to-three applications of glyphosate, year after year on Roundup Ready crops. But it was a hard sell, because the pesticide-seed-biotech industry was pushing in the opposite direction.

The industry kept farmers on a herbicide treadmill by incrementally moving more herbicide-resistant genes into the most popular soybean, corn and cotton varieties. Seeds on which farmers could spray one post-emergence herbicide (Roundup) in the late 1990s have become seeds engineered to tolerate 4, 5, or even up to 8 herbicides.

“In the arms race between biology and biotechnology, the weeds are winning.” Check out this in-depth piece in the New York Time Magazine about the rise of resistant weeds. (We highly recommend listening to the excellent audio version that NYT Mag provides.)

For more than a decade a primary goal of the research and corn-soybean plant breeding programs carried out by integrated seed-pesticide companies has been to make it easier for farmers to spray more herbicides in response to the spread of resistant weeds triggered, in the first place, by excessive reliance on herbicides. And not just easier. The industry has made the use of more herbicides near-mandatory since all the major companies have moved multiple herbicide-resistant genes into their most popular, high-yielding varieties.

This sort of bundling of technologies can create and reinforce anti-competitive behavior. Hopefully the impacts on farmers and rural America of the herbicide-marketing strategies now embraced by the four firms that control most of the pesticide-seed market will make it onto the radar screen as the Biden Administration takes a fresh look at the negative consequences of excessive market power. Selling more herbicides by controlling plant breeding priorities is a good example of a problem no one saw coming, and no agency or law is designed to address.

This nearly universal industry response to the spread of herbicide-resistant weeds has locked farmers into weed management systems progressively more dependent on herbicides. This strategy may buy a little time, but comes at increasingly high costs to farmers, rural communities, and possibly public health.

The consequences are now playing out across the Heartland and wherever farmers are planting mostly GMO corn, soybeans and cotton.

The list of problems made worse by the spread of resistant weeds and rising herbicide use is a long one. Herbicide use and costs are increasing. GMO seed price inflation has reached historic proportion. A transfer of historic income per acre is occurring from farmers to pesticide-seed companies. Adverse impacts on soil health, water quality and biodiversity are unmistakable. Starting in 2016 and year-to-year, more herbicide drift and damage is being reported to nearby crops, backyard gardens, shelter-belts, orchards and iconic trees, with no end in sight.

What about public health?

One important question has received little attention, but should. Is rising herbicide use in the Midwest triggering more frequent and/or more serious adverse impacts on birth outcomes and children’s development?

The Heartland Health Research Alliance (HHRA) is a new non-profit set up to sponsor the kind of public health science needed to answer this important question. Our current flagship project, The Heartland Study, will strive to do so by enrolling 2,000 mother-infant pairs early in pregnancy in our study protocol. We will quantify herbicide levels in urine, search for epigenetic changes and determine whether those women most heavily exposed to herbicides were more likely to have difficult pregnancies or deliveries, or give birth to newborns with developmental problems or birth defects.

We are acutely aware of the weed-management challenges facing Wisconsin farmers and hope to generate new science that will help guide changes in weed control systems sufficient to prevent adding another problem to the list.

Clearly, the single most important change on the farm is reducing today’s overall, often excessive reliance on herbicides. There are simple, proven changes in farming systems that can take pressure off herbicides, lower costs and environmental impacts, and promote resiliency on the farm.

As farmers make weed management decisions each spring, we hope new insights from our clinical research will reduce use of higher-risk herbicides and promote progress toward farming systems in which “many little hammers” lessen the share of the burden carried by herbicides.

We know herbicide exposures during pregnancy are rising across the Midwest. Herbicides known to raise the risk of reproductive problems and adverse birth outcomes account for much of the increase in herbicide use in the last 5 years. The use of dicamba and 2,4-D is rising the fastest, two herbicides also classified as possible human carcinogens by the International Agency for Research on Cancer.

Why are more and more corn, soybean and cotton farmers spraying these two high-risk, old-school herbicides? One big reason is because they are linked to newly developed and approved GMO crops.

As a nation, our record in dealing with high-risk pesticide uses is spotty. It usually takes the Environmental Protection Agency (EPA) decades to conduct the in-depth risk assessments needed to justify restricting or banning the use of a popular, widely used pesticide. In the interim, collateral damage can mount, as is the case today with the ongoing spread of resistant weeds, more herbicide use and widespread drift and crop damage.

There is good news on the regulatory front. Progress has been made in the sciences supporting pesticide risk assessment and regulation, but big gaps persist between real-world risks and the focus of EPA risk assessments, regulatory decisions and pesticide label changes.

Plus, the challenges facing regulators are getting more complicated, not simpler. Many dynamic factors have to be taken into account in quantifying pesticide risk levels. Where and how pesticides are applied, how much is applied, whether levels are building up in the soil, water, or in people’s bodies, and why some people are more vulnerable than others.

Our work is focused on how the farm community, pesticide industry, regulators and public health specialists can identify emerging risks arising from farming system choices, and do so quick enough to avoid adverse outcomes lasting a generation or more that could impact millions of people across the Heartland. 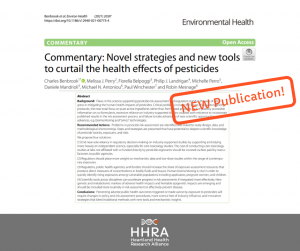 We suggest four concrete steps in a just-published Commentary entitled “Novel Strategies and New Tools to Curtail the Health Effects of Pesticides.” (For more on the new commentary, see our Op-Ed in Wisconsin’s Cap Times.)

First, the foundational toxicology studies supporting EPA pesticide regulatory decisions should be carried out by scientists not working for, or aligned with pesticide manufacturers. This important research should be funded through grants to universities and public research institutions, and paid for via pesticide registration fees.

Second, we need to invest more resources in measuring pesticide levels in people. Biomonitoring is by far the most accurate way to track changes in human exposures over time and across regions. Accurate estimates of real-world exposures are especially vital when, like today, overall pesticide reliance is rising and big changes are occurring quickly in the mix of pesticides farmers apply and people are exposed to.

Third, scientists are making rapid progress in identifying the mechanisms through which exposure to a pesticide can lead to adverse health outcomes, yet the EPA pays almost no attention, nor places much weight on results from cutting-edge scientific methods. This bias against new scientific methods must end.

Fourth, a better job can be done in integrating scientific tools and insights from multiple disciplines into the pesticide risk-assessment process. For example, new genomic sequencing technology is deepening understanding of how prenatal pesticide exposures can disrupt fetal development and/or undermine children’s development. Advances in epidemiology can be accelerated through direct measures of exposure via human biomonitoring, coupled with the use of genomics to more effectively track impacts of exposures on specific markers of disease.

Science is moving fast, but regulatory test requirements and EPA risk assessment science continues to rely mostly on test methods and requirements that were not even cutting-edge in the 1980s.

Corn and soybean production is the backbone of the US food system. Almost one in every two acres of cropland harvested annually in the US produces these two crops. As a nation, we must take steps to prevent further erosion in the efficacy of weed management systems, because year in and year out, weeds will emerge on every field and something has to be done to keep them from robbing moisture and nutrients from crops. 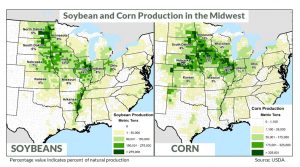 Changes in weed management systems also need to be aligned with other national needs. New, promising policies are under consideration in Washington DC to enhance soil health and stabilize the climate by sequestering more carbon in the soil and in the plants and trees rooted in it. Significant progress is most likely if novel policies are crafted that also support Integrated Weed Management systems, and if they do not, they will be a hard sell to farmers.