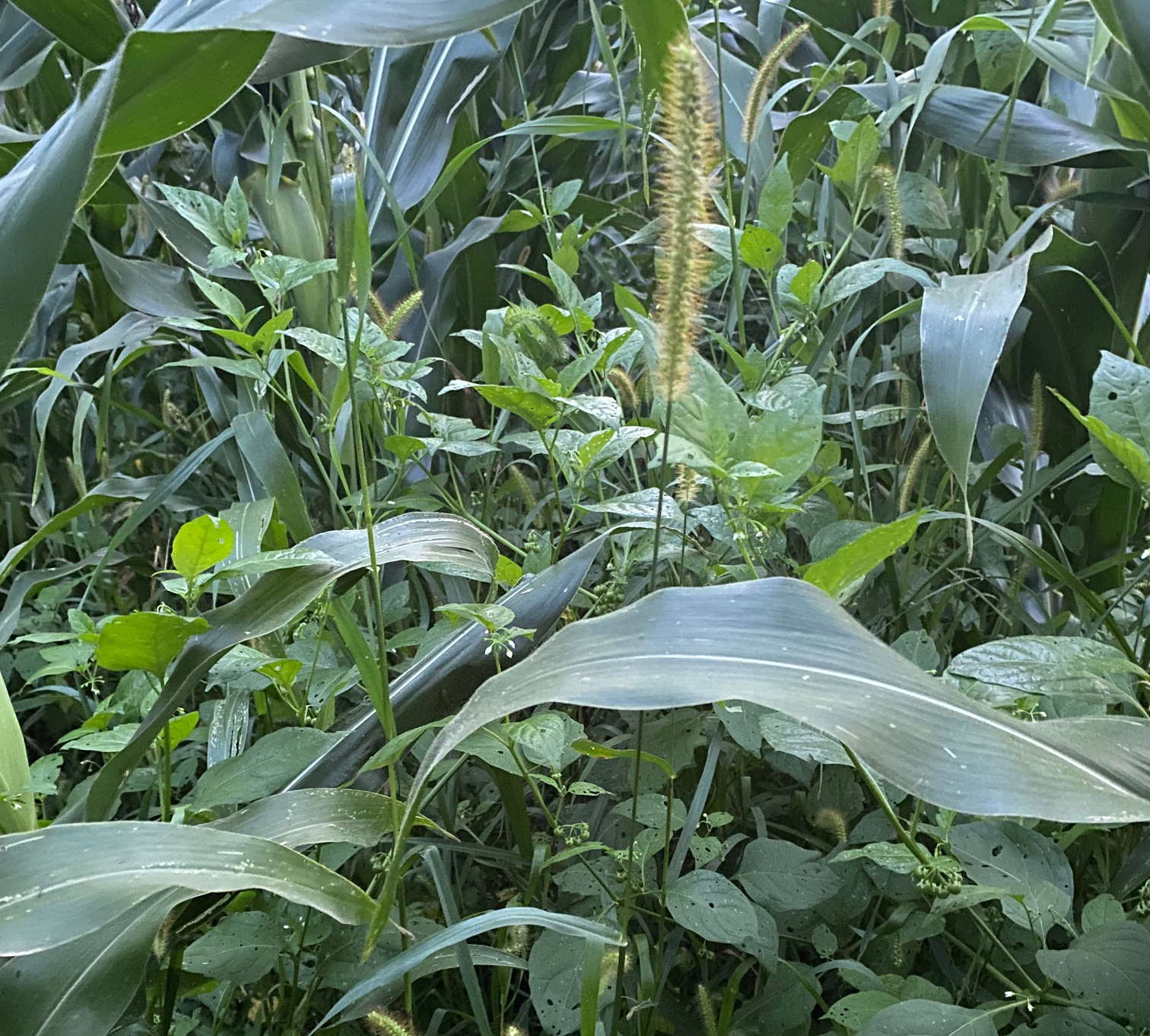 Is a Weed Management Trainwreck Around the Corner? – Reflections on the “Superweeds” Wake Up Call in the New York Times 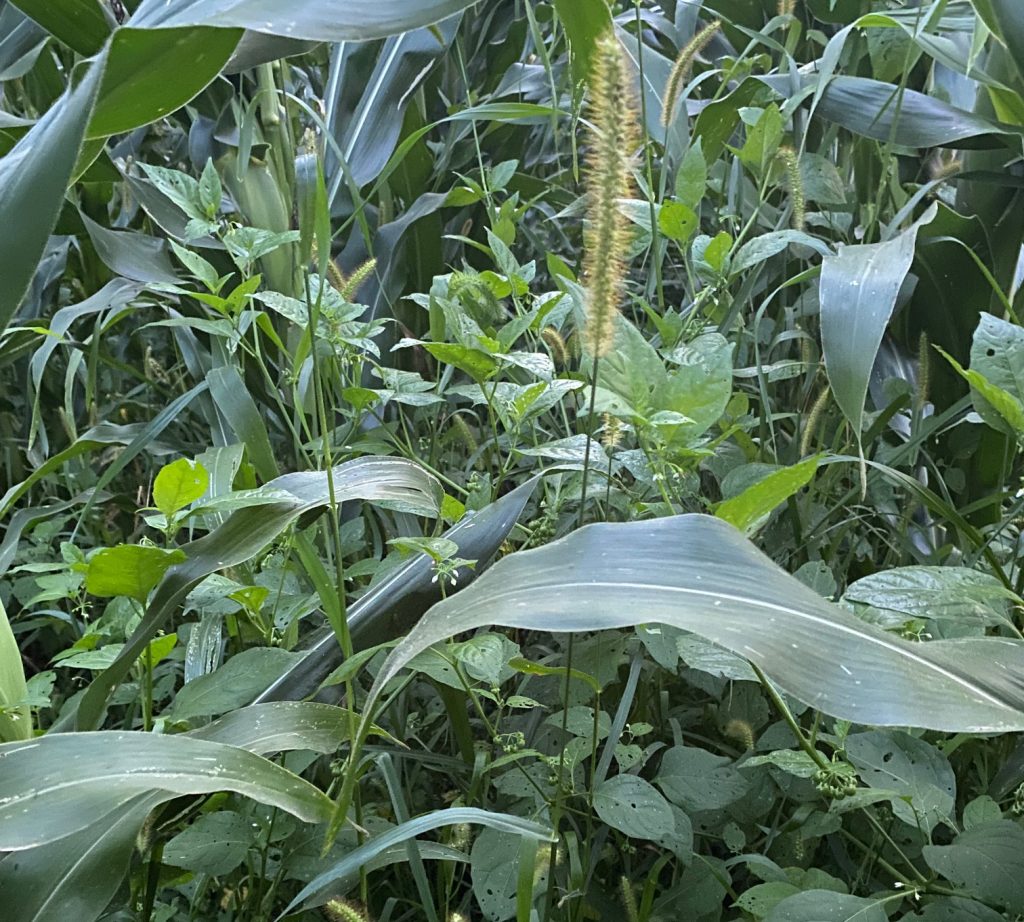 This corn field is overrun with resistant weeds.

In the mid-1980s when I was the Executive Director of the Board on Agriculture in the National Academy of Sciences (NAS), I had the privilege of working with some of the nation’s top weed scientists who had already become concerned over excessive use of herbicides. They wrote the weed management chapter in the 1986 NAS book Pesticide Resistance: Strategies and Tactics for Management.

The scientists, including some working with herbicide manufacturers, explained how excessive use of herbicides can trigger genetic changes in weed populations that, over time, will lead to weeds resistant to once-effective herbicides. They also wrote about the collateral damage imposed on farmers, rural communities, the environment and public health when resistant weeds get a firm foothold in farm fields. The book also laid out what farmers and industry must do to prevent the spread of resistant weeds.

But then along came a technology that turned one of the farmers’ most difficult challenges (weed management) into one of the simplest. The first GMO “Roundup Ready” crops hit the market in 1996. Resistant weed management practices were largely ignored right when most urgently needed.

This in-depth piece in the New York Time Magazine tells the story of the rise of resistant weeds. (We highly recommend listening to the excellent audio version that NYT Mag provides.)

Within just a few years, excessive Roundup use triggered emergence of the first glyphosate-resistant weeds. The eye-opening August 21, 2021 expose by H. Claire Jones published in the New York Times explains what happened next: “Attack of the Superweeds: Herbicides are losing the war — and agriculture might never be the same again.”

Within just a few years, glyphosate-based herbicides came to dominate both the corn and soybean herbicide market. This created a perfect storm leading to today’s superweeds: a system fully dependent on herbicides in both crops, and even worse, just one herbicide, glyphosate.

By 2001 tens of thousands of fields had been sprayed six to eight times with Roundup and essentially no other herbicides, and the first glyphosate-resistant weeds started their journey to superweed status. The sad part of this saga is that these problems were predicted accurately by several well-respected scientists and could have been avoided through adherence to the commonsense weed resistance-management practices recommended in the 1986 NAS report.

But the industry told farmers and academic weed scientists not to worry, that resistance would not occur despite heavy reliance on glyphosate. Roundup Ready gained near-complete adoption on conventional corn, soybean and cotton farms by the mid-2000s, with not even a nod to the need for resistance management practices. This created a Covid-19 analogue in the world of weed management: palmer amaranth superweeds resistant to about every chemistry in the herbicide toolkit.

The pesticide-seed industry created this problem and refused to acknowledge it. They fought good-faith efforts to deal with it by university weed scientists, some companies and farmers. The industry used its market power and political clout to sustain a business model very good for its bottom line — but bad for just about everyone else.

As the NY Times “Superweed” piece explains, now it’s the farmers who are paying the piper for believing two key industry talking points. First, planting these herbicide-dependent GMO crops was and remains the epitome of “modern farming.” Second, glyphosate would not trigger resistance in weeds because of its complex mode of action, the mechanism whereby a pesticide kills or controls its target.

Despite the huge increase in seed-plus-herbicide costs and clearly worsening problems with resistant weeds, most large-scale farmers still believe the industry has their back. They believe the industry is developing new technologies that will help them spray their way out of the box canyon that now surrounds them.

This is why the weed scientists quoted in the superweeds story are likely right in predicting that this problem is going to get worse before farmers are willing and able to make the systemic changes needed to curtail it.

We started HHRA’s flagship project, The Heartland Study, because we knew the superweeds were coming to the Midwest. We wanted to determine whether rising herbicide use and exposures in the Heartland are contributing to more frequent or serious complications in pregnancy and children’s development. We hope not — but if true, preserving the intelligence and good health of the next generation of children born in the Midwest will be another reason to help farmers find ways off of the herbicide treadmill.

There is one reason for optimism. The changes in farming systems needed to lighten reliance on herbicides are closely aligned with those needed to restore soil health and capture and hold carbon in the soil. These changes are now deemed important enough in Washington DC to justify changes in farm policy and public and private investments in order to slow global warming and mitigate the costs of climate change.

HHRA will be sharing its science and adding its voice to those hoping to accelerate positive farming system changes for both the climate and farmers dealing with each year’s new crop of weeds, super or not.