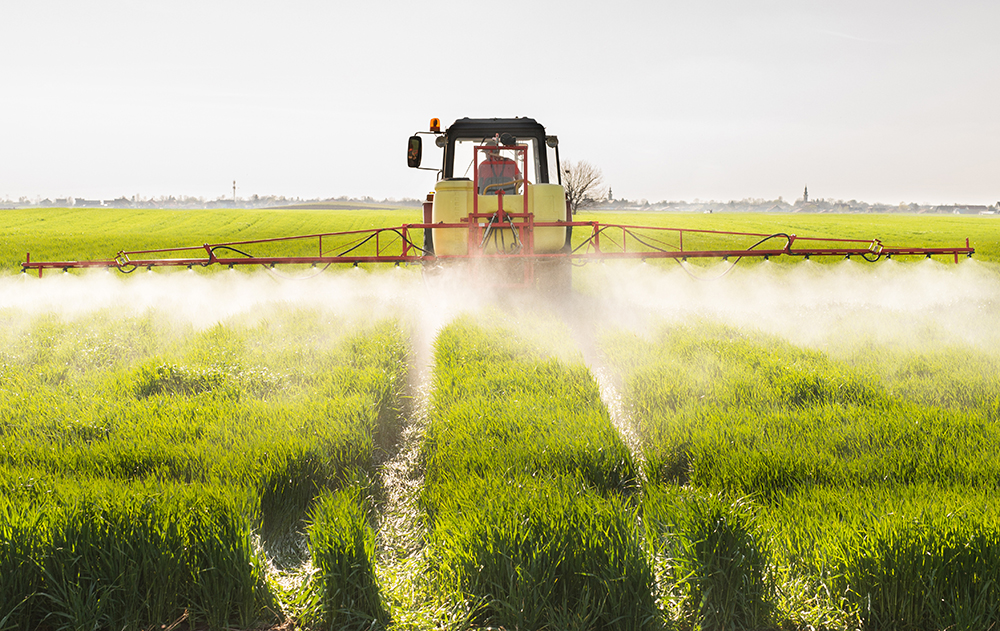 Fungicides Use, a Resistant Pathogen, and Rising Death Rates — CDC Connects the Dots

Azole fungicides are used primarily on wheat, corn, and soybeans.

In the 1950s and 1960s, rapidly rising use of antibiotics to promote growth of farm animals triggered mutations leading to resistant bacteria that have found ways to jump into the human population.

For most of the last one-half century, over 7 pounds of antibiotics have been given to farm animals for every 1 pound administered to people. Pigs, chickens, and beef cattle have been an important, and perhaps the primary well from which new antibiotic resistant genes have emerged.

In the 1970s and 1980s, insecticides and herbicides took over primary insect and weed control duty on most American farmers. The better a particular pesticide worked, the more farmers came to rely on it. But just as in the case with antibiotics on the farm, excessive reliance triggered the emergence and spread of resistant strains of many economically damaging pests.

And so, no one should be surprised that the rapidly rising use of triazole fungicides by farmers over the last decade is now contributing to the emergence and spread of fungal pathogens that cause human disease. But not just any run-of-the-mill fungal pathogen.

A new paper by a team of scientists from the Centers for Disease Control (CDC) and US Geological Survey (USGS), “Trends in Agricultural Triazole Fungicide Use in the United States, 1992–2016 and Possible Implications for Antifungal-Resistant Fungi in Human Disease,” tracks the rising frequency in phenotypes of the fungus A. fumigatus that are resistant to triazole drugs (Toda et al., 2021).

A. fumigatus can lodge in and attack the lungs. It is the leading cause of invasive mold infections, especially in people with weakened immune systems. Death rates range between 25% and 59%, but average 25% higher when a patient is infected with triazole-resistant A. fumigatus.

The CDC team points out that some A. fumigatus strains carry resistance markers that have been associated with environmental fungicide use, rather than previous patient exposure to antifungal, triazole drugs.

Wheat, corn, soybeans, and other crops in the Midwest and Southeast accounted for most of the increase. Until about a decade ago, almost no corn acres were sprayed with any fungicide. In 2021 over 30% of the national crop will likely be treated. A triazole fungicide will be the product of choice for about one-third of these treatments.

HHRA has prepared two tables with national data on the use of 13 triazole fungicides from 1991 through 2019. The data were retrieved from HHRA’s Pesticide Use Data System (PUDS).

Access here a table tracking changes in pounds applied of the 5 mostly heavily used triazoles, other triazoles, and all triazoles. Figure 1 below tracks the remarkable rise in use since the early 2000s. 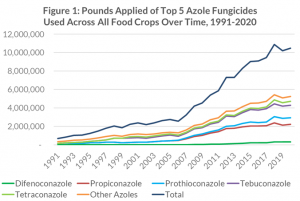 Access here a similar table showing the upward trend in acre-treatments with triazole fungicides. Figure 2 presents these data graphically. Access the Excel workbook with these tables and figures here. 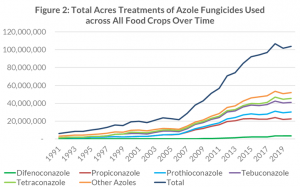 Note in both figures that over the last decade propiconazole plus tebuconazole have accounted for 58% to 75% of the total pounds and acre-treatments made with all triazole fungicides. These two fungicides are among those most structurally similar to the triazole medications widely used to treat A. fumigatus infections.

The CDC team stresses the need to conduct more intensive monitoring of A. fumigatus populations to track the spread of triazole resistant phenotypes. They call for more focused research on what is driving the steep increase in triazole fungicide use on some crops. Since the early 1990s, the pounds of triazole fungicides applied has risen 15-fold. Over 50 million acre-treatments were made with a triazole in 2019, or close to 15% of all harvested cropland in the US.

What is Driving the Rapid Rise in Triazole Fungicide Use?

Over the last 50 years farmers have intensified crop production in multiple ways.

The number of corn, soybean, wheat, and cotton seeds planted per acre has at least tripled, and on some farms seeding rates have gone up four-fold. This means plant root systems now overlap and share the same soil. A soil-borne pathogen infecting one plant can infect another without moving.

With today’s high seeding rates, about 35,000 corn plants per acre are separated by only inches, instead of about a foot as in the past. When the wind blows, plants rub against each other, causing abrasions through which fungal spores and bacteria can enter plants. Once in the door, disease can often flourish.

To obtain optimal yields of corn, farmers must apply 150-250 pounds of nitrogen (N) fertilizer. As seeding rates rise, the amount of N needed per bushel rises and N-use efficiency falls.

The spike in soil N levels following fertilizer applications triggers explosions in the populations of certain microorganisms and crashes in the population of others. This cycle degrades soil health over time. The absence of healthy, diverse soil microbial communities opens the door to opportunistic pathogens and soil-borne insects.

Most of the corn, soybeans, and cotton grown in the US is planted with seeds genetically engineered (GE) to express multiple transgenes conferring resistance to herbicides. In the case of corn and cotton, GE plants also produce Bt endotoxins to combat sucking, chewing insects. Most corn and cotton varieties express two or three Bt endotoxins, and SmartStax corn produces six and is resistant to three herbicides.

These GE plants have multiple genetic elements added to them designed to turn on these added traits at the right time, in the right place, and hopefully turn them off when not needed. The combined effect of these novel genes in GE cultivars can disrupt, delay, overamp, or block a plant’s normal response to biotic and abiotic stress, sometimes leading to new plant health problems.

This new CDC paper confirms that farmers, the pesticide industry, scientists, and physicians have a new problem to worry about. Like many others, this new problem is grounded in plant and soil health and caused by the practices, technologies, and systems farmers have relied on to drive crop yields upward.