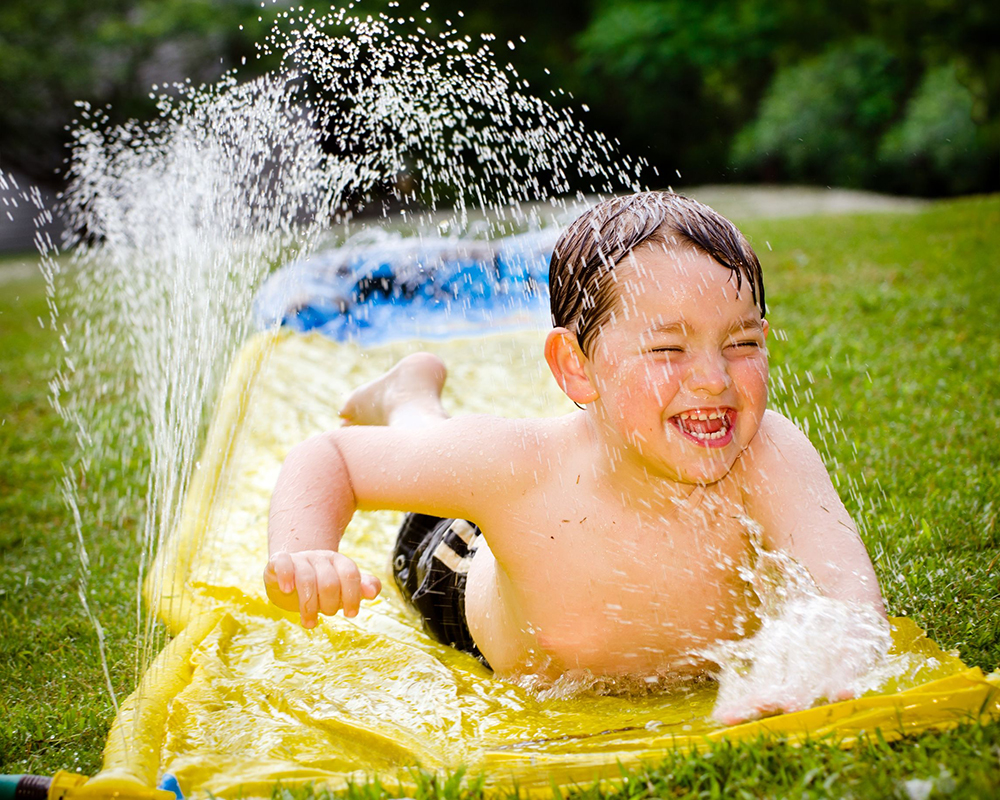 On days too hot for football in the park, kids in our Palo Alto neighborhood in the early 1960s often met at a friend's house where a slip and slide was set up. Imagine exposure levels when kids indulged in slip and slide on a lawn sprayed with 2,4-D by ChemLawn a few days earlier.
Archived Blog Posts

A Father’s Reflections on Football, Dandelions, and Why We Started The Heartland Study

On days too hot for football in the park, kids in our Palo Alto neighborhood in the early 1960s often met at a friend's house where a slip and slide was set up. Imagine exposure levels when kids indulged in slip and slide on a lawn sprayed with 2,4-D by ChemLawn a few days earlier.

My parents moved the family to a kid-centric community in Palo Alto, California as I entered the 6th grade. Through junior high, a favorite way to spend the afternoon in the spring, especially after a day or so of rain, was touch football at the nearby park. The wetter the field the better. Sure, it was hard to hold onto the ball, but it was so much fun when a play ended with two of three kids sliding through a mud hole.

By the end of some games, plays were designed and executed to bring about just that outcome.

Years later, and well after I had become professionally entrapped in the world of pesticide use, risks, and regulation, a single herbicide seemed to always be in the news: 2,4-D. It was one-half of Agent Orange. An impurity in it was the single most toxic chemical known to humankind. The list of adverse public-health consequences caused by it was already a long one. Vietnam veterans regrettably played a starring role in the 1980s and 1990s as the list of confirmed, adverse human health outcomes grew.

Plus, 2,4-D was almost certainly the herbicide of choice in the Palo Alto Parks and Recreation Department when spring rains brought on the prodigious crop of dandelions that blessed our football fields and community lawns every year.

As I learned more about how the human body responds to 2,4-D — itching, acne, and sometimes much worse — I remembered how I would sometimes want to tear off my muddy tee-shirt and hurry home for a shower to wash off my back whatever was setting it afire. And the damn acne…let’s not go there. (Note that there we have much more on the health impacts of 2,4-D in our bibliography). 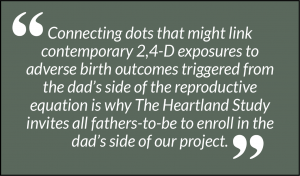 For years I worried that my youthful exposures to 2,4-D might have a more serious impact on my health or my children’s genes. As I grew older, the first concern faded but I continued to wonder if those football games in the park might have played some role in the genetic roulette that gave rise to my three kids.

From my work with The Heartland Study science team, I now understand that my exposures to 2,4-D likely had little or no impact on my kids. Instead, any impact of 2,4-D on my genes likely came about from 2,4-D exposures experienced by my mother and father, especially exposures around the time I was conceived.

My mother grew up in a Boston suburb and my dad was raised in a heavily agricultural region in Nebraska. So, if 2,4-D or any other agricultural pesticide played a role in making me me, my personal genetic twist of faith likely came from my father.

Today, whenever I pass a soccer or ballfield covered with kids, I wonder if their skin ever burns after sliding though a mudhole in the spring.

I hope that the groundskeeper responsible for the fields children now play on have learned that a few well-timed mowings in the spring work just as well as herbicides in keeping ahead of dandelions and other weeds.

Mowing is not a perfect weed control solution. It requires the burning of fossil fuel and disrupts the peace and quiet on Saturday afternoons. But before we know it, all the mowers next door will be electric and will go round and round in near silence.

Then, finally, that burning sensation after a spirited spring soccer or football game, or barefoot frisbee with the dog will become nothing more than a distant memory, and that will be progress.

HHRA is developing protocols to help determine whether, to what extent, and how today’s rising levels of exposure to 2,4-D and other herbicides are contributing to reproductive problems and adverse birth outcomes. Connecting dots that might link contemporary 2,4-D exposures to adverse birth outcomes triggered from the dad’s side of the reproductive equation is why The Heartland Study invites all fathers-to-be to enroll in the dad’s side of our project.

The recently released book Countdown by our friend Dr. Shawna Swann traces forty years of science and insights on how a father’s DNA can impact birth outcomes. Key discoveries on sperm quality and health have been made over the years by scientists conducting studies on 2,4-D, and many are featured prominently throughout the book.

A Heartland Study Co-PI, Dr. Melissa Perry, did her doctoral research on sperm quality and has conducted several important studies on the topic. Learn more about her work in this profile, or enter “Perry” in the HHRA bibliography search engine. A search using the keyword “2,4-D” will provide easy access to around 50 published papers, including most of the important ones on 2,4-D and sperm quality that are discussed in Countdown.