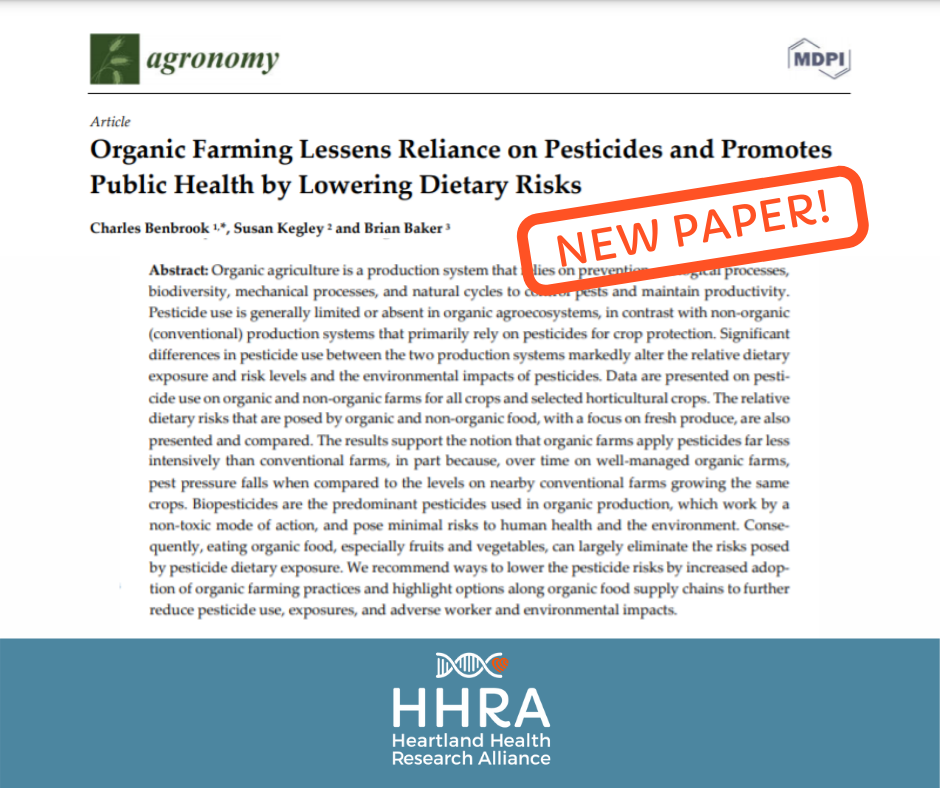 A new HHRA paper highlights the need to convert cropland growing fruits and vegetables to organic in order to reduce consumer's dietary risk from pesticide residues.

A new HHRA paper published in the peer-reviewed journal Agronomy reports significant impacts of organic farming systems on pesticide use and the risks stemming from pesticide residues on food.

“Organic Farming Lessens Reliance on Pesticides and Promotes Public Health by Lowering Dietary Risks” was co-authored by HHRA Executive Director Chuck Benbrook, and research partners Susan Kegley, and Brian Baker. Published on June 22nd, this is an open-access, free to download paper accessible via our bibliography.

Lead author Dr. Benbrook has published several papers over three decades comparing pesticide use and risks in organic versus conventional foods but states that “This paper contains the most rigorous, data-driven comparison of pesticide use and dietary risks on organic fields producing a give crop compared to nearby conventionally managed fields. Our findings are encouraging.”

The 36-page paper provides detailed comparisons of pesticide use on organic farms compared to nearby conventional farms growing the same crop. The team developed a methodology to extract the data needed to make such comparisons from the detailed Pesticide Use Reports collected and made available by the California Department of Food and Agriculture.

The EPA has approved just 91 active ingredients for use as pesticides on organic farms (see Table S.1 in the paper’s supplemental tables for the full list). Many of these are common ingredients found in many households, such as isopropyl alcohol, soap, vinegar, and clove oil. Meanwhile there are over 1,200 pesticide active ingredients approved for use on conventional farms.

In a many cases in California, the same grower manages fields producing the same crop under these two management systems. The team developed methods to identify such fields and compare the pesticides used on each, as shown in the interactive graphic below.

The detailed comparisons of the residues and risk levels in organic and conventional foods were done using HHRA’s Dietary Risk Index (DRI) system. The data sources and methodologies embedded in that system are described in a 2020 paper in the journal Environmental Health.

You can access a series of interactive tables reporting DRI system results comparing residues and risks in organic and conventional foods on Hygeia Analytics. These tables draw on pesticide residue data from the USDA and pesticide toxicity data from the EPA.

A key conclusion of the team’s analysis is that by converting the 1.2% of US cropland growing fruits and vegetables to organic production, the nation’s farmers could dramatically reduce pesticide dietary exposures and risk.

“We have empirical evidence to support what organic farmers have known all along. It is possible to grow high quality crops with biological and cultural practices, instead of relying primarily on toxic pesticides,” says co-author Dr. Brian Baker. Doing so will lead to substantial public health gains, especially for pregnant women, infants, and children, and those people applying pesticides and exposed to them occupationally in or near farm fields.

Our blog “Take Home Messages in ‘Organic Farming Lessens Reliance on Pesticides and Promotes Public Health by Lowering Dietary Risks‘” provides a summary of the new paper and its key implications and recommendations.