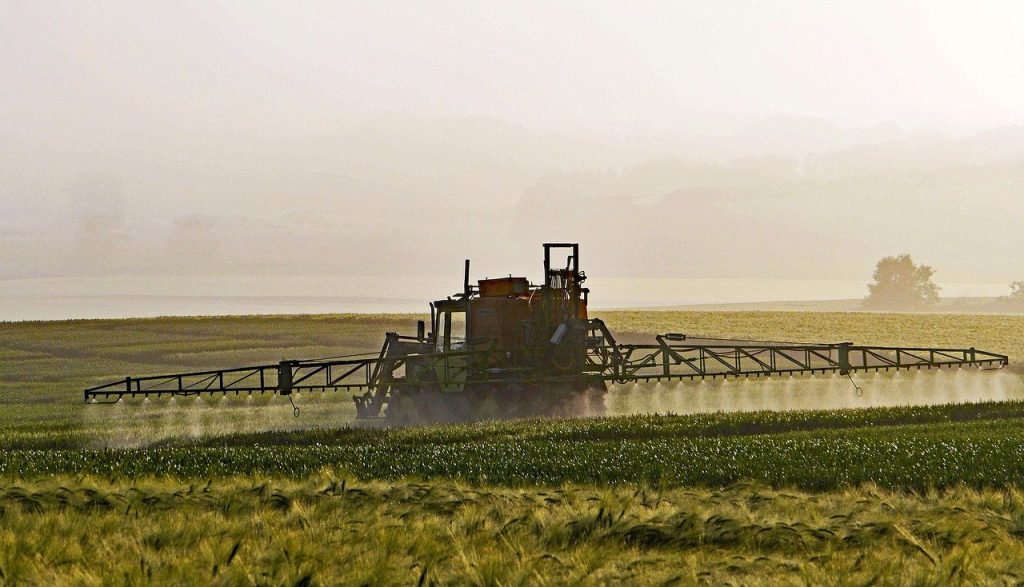 Extracting New Insights from Old Data on a Pressing Concern — The Rapid Rise in Reliance on 2,4-D Herbicide in the Heartland

Leveraging existing research is central to HHRA’s strategy to accelerate progress in answering contemporary questions about the health impacts of pesticide exposures. One of HHRA’s goals is to draw on existing datasets to glean new insights into pesticide exposure levels, trends, and health impacts. We use pesticide levels in human urine, known as biomarkers, as our primary method of estimating exposure.

As a doctoral student in Environmental Health at George Washington University, I have had the opportunity to work with a team of distinguished researchers to publish a paper in Environmental Health reporting new insights from one such effort to use existing datasets to answer new questions. We report clear associations between trends in the use of the herbicide 2,4-D since 2001 and the frequency of exposures to 2,4-D over time and across the U.S. population. I receive generous doctoral funding sponsored by HHRA to support my research on herbicide exposures and their health impacts, including the costs to publish my research.

In our research leading to this new publication, our team studied the percent of the population with detectable levels of 2,4-D in their urine across 6 cycles of the National Health and Nutrition Examination Survey. NHANES is a large and valuable public dataset providing information about the health and environmental exposures experienced by a representative sample of Americans.  We were able to evaluate data on 14,395 people with available 2,4-D exposure biomarker levels who participated in NHANES between 2001 and 2014. 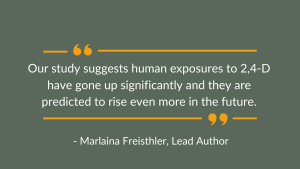 To conduct our analysis, we extracted data on 2,4-D herbicide use from HHRA’s Pesticide Use Data System (PUDS).  All data in PUDS come from annual pesticide use surveys conducted by the U.S. Department of Agriculture.

By combining 2,4-D exposure data from NHANES with 2,4-D use data from PUDS, we found:

We are particularly concerned by the last two findings noted above. Some physical and neurological processes that are still developing in fetuses, infants, and young children are far more susceptible to harmful impacts from chemical exposures. This means that women of childbearing age and young children are vulnerable segments of the U.S. population when exposed to chemicals like 2,4-D. This is especially important because NHANES includes only a small number of pregnant women and has not been used to sample children under age 6 for 2,4-D biomarkers, though infants and toddlers often demonstrate even higher levels of exposure to some chemicals than older children. We want to know why women and children are having these more extreme increases in detections of exposure to 2,4-D, in the hope that answers will lead to actionable steps to reduce exposures to these most vulnerable segments of the population.

Answering our core question is particularly important now, as use of 2,4-D and other herbicides rises sharply across the country, and especially in the Midwest.  This is why our scientists are measuring 2,4-D exposure as part of HHRA’s flagship project, The Heartland Study.

Projections indicate that around two-thirds of the soybean seed sold to farmers in the next few years will be genetically engineered to tolerate both 2,4-D and glyphosate (i.e., Roundup). We expect that reliance on these types of “next-generation” seeds engineered to have multiple herbicide tolerances will continue the sharp increases in use of 2,4-D and other herbicides. In fact, HHRA projects that by 2030, 2,4-D use in the Heartland will exceed glyphosate use, as shown in the dynamic data visualization below.

Our study results indicate that with these increasing uses of 2,4-D, there could very likely be increased population exposures, which our research team is continuing to study. Other ongoing HHRA-funded research projects are exploring the changes in other herbicide exposure levels over time in Midwestern women and the impacts of herbicide exposures on birth outcomes and children’s development.

Below you will find the George Washington University press release announcing publication of our study, a link to access the paper, and the dynamic graphic showing expected increases in 2,4-D use through 2030.

*Marlaina  Freisthler is a PhD student and researcher at the George Washington University. Her graduate fellowship is supported by HHRA.