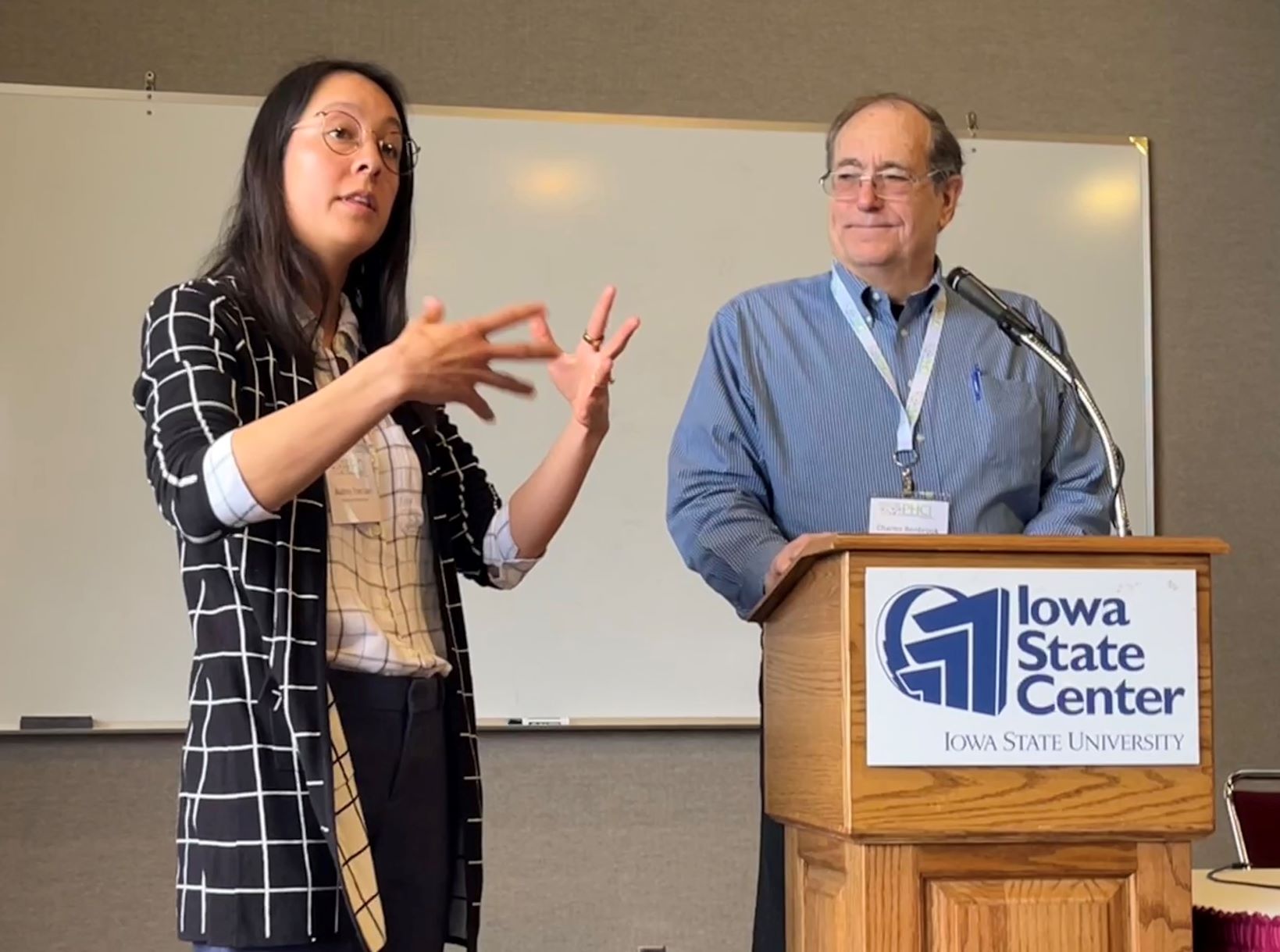 Better Late Than Never: Farmers, Ag Scientists and the Public Health Community Come Together in Iowa and Pay Tribute to a Sustainable Ag Pioneer 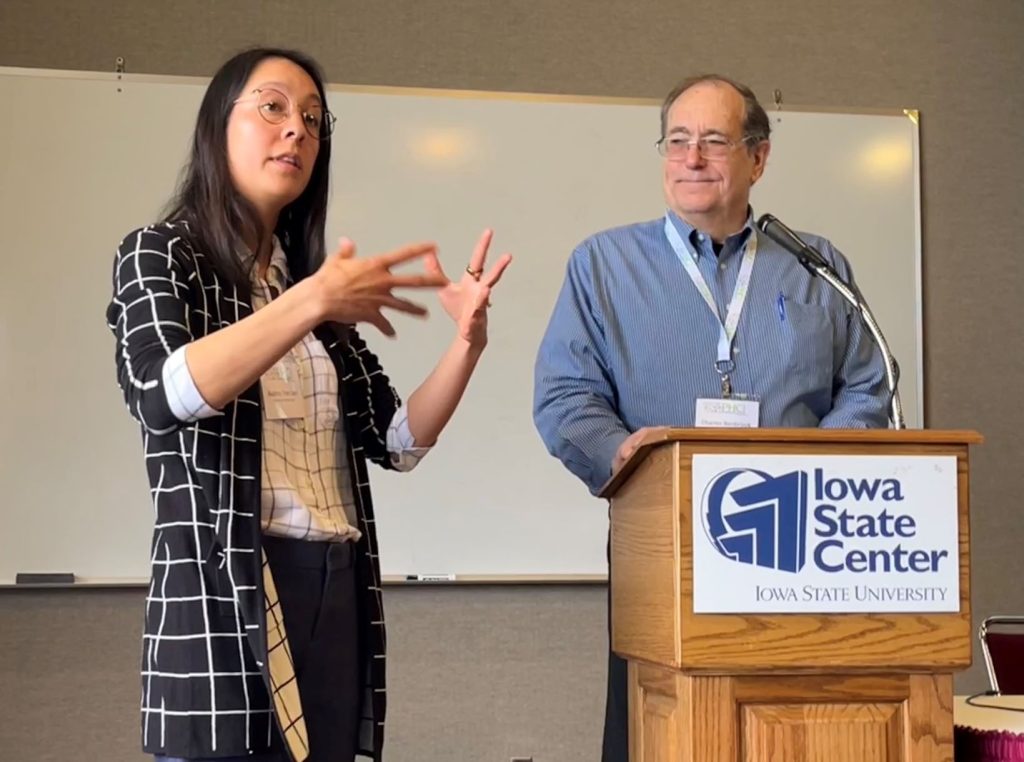 The HHRA team had a very successful trip to Ames for the public Health Conference of Iowa where ED Chuck Benbrook and board member Audrey Tran Lam co-hosted a session on the implications of rising herbicide exposure to public health.

“I have been trying to bring together farmers and the public health community in Iowa for my whole career and tonight it finally happened.”

This is what one attendee told the HHRA team at the end of our May 3, 2022 reception in Ames, Iowa.

Our reception was a tribute to sustainable ag pioneer, Fred Kirschenmann. It was sponsored by HHRA, Practical Farmers of Iowa, and the Farming for Public Health program (FFPH) at the University of Northern Iowa. HHRA Board member, Audrey Tran Lam, manages the FFPH and helped organize HHRA’s participation in the 2022 annual Public Health Conference of Iowa (PHCI).

The epicenter of herbicide-intensive weed management in the Heartland seemed the right place to debut HHRA science, and the beginning of the herbicide spray season a fitting time to do so. The pictures accompanying this blog capture the meeting’s good energy and fellowship.

During the conference a steady flow of public-health practitioners stopped by the HHRA booth and engaged our dynamic duo, Grace Koch and Molly Funk, in dialogue about HHRA and the Heartland Study. Many of these public health professionals had either historic roots in farming, or were farmers themselves. The genuine interest in bringing a public health lens to agricultural practices in Iowa was inspiring.

Interactions at our booth sparked discussions about farming, public health, climate change, soil health, environmental justice and more. We handed out HHRA and Heartland Study materials to public health professionals from all backgrounds and specialties. A bagful of certified organic mini-chocolate bars disappeared as fast as Grace and Molly could replenish the supply!

Many people stopping by our booth shared  personal stories about times they were sprayed with pesticides, or smelled that smell in the air, or wondered whether their water was safe to drink.

Others told us about a family member (or members) or friends with cancer. One woman told us about a farm family she knew in which three members had been diagnosed with the same cancer over a two-year period. They lived on a farm with pesticides in the well water.

At our booth, questions were raised almost non-stop about whether pesticides might be playing a role in some of the health problems that seem on the rise in Iowa. Exposures through drinking water came up over and over.

As important as water is as a route of herbicide exposure, we were struck by the fact that very few people were aware that many Iowans, and most people in farm country, are breathing in air laced with a pinch of volatile herbicides on many days from mid-June through August, and have been doing so since 2017.

During the HHRA and FFPH co-led concurrent session, the Iowa public-health community was understandably troubled upon hearing some of what we had to say, but many expressed gratitude that Iowa’s #1 industry had made it onto the agenda of their state’s annual meeting of public-health practitioners.

For most of the ~400 people at the May 3-5 meeting, it was the first in-person professional meeting since Covid shut down travel and large gatherings.

HHRA was the “Keynote Sponsor” for the meeting. It was a great investment that provided us the opportunity to introduce HHRA and the Heartland Study to conference attendees at the beginning of each day’s plenary session.

On day one, Chuck Benbrook covered HHRA and HS basics and invited all attendees to our reception that evening — the tribute for Fred Kirschenmann.  Chuck also pitched our substantive session Wednesday morning entitled “Iowa-Centric Public Health Challenges in the Wake of Rising Herbicide Use.” And – impressing his staff – he did so in just over his allotted three minutes!

Audrey Tran Lam opened the plenary on day two with a deeper dive on why she was pleased to introduce her Iowa public-health colleagues to the Heartland Study and HHRA science, and why she hoped this would be the beginning of an information-rich and sustained conversation.

The highlight of the trip, though, was the reception and tribute for Fred Kirschenmann. Fred is well into his 80s and retired last year after nearly 25 years at Iowa State University. For many of those years, Fred was the Director of the once-world renown Leopold Center for Sustainable Agriculture at Iowa State University, where the conference was held.

Despite the Leopold Center’s many valuable, practical, and appreciated contributions to farmers and farming in Iowa, the political powers-that-be in Iowa incrementally dismembered the Leopold Center, diverting and/or cutting funding and staff positions, ending programs and driving away faculty that wanted to work with the Center. Now, there is no Leopold Center and Iowa State University — and Iowa — is the lesser for it.

Upon Fred’s retirement from ISU there was no celebration honoring his contributions to the institution, to the many students and faculty who worked on Leopold Center projects, and to people across the country and around the world who benefitted for a half-century from Fred’s unselfish sharing of knowledge and insight, connections and wisdom, all deep-rooted and time-tested.

It was an honor for HHRA, PFI and the FPHP to host the tribute for Fred. Many of his friends and colleagues at ISU attended and took advantage of the opportunity to tell Fred how deeply his work and fellowship was valued and appreciated.

In addition to the familiar faces at our reception, there was an impressive turnout from national and local public and environmental health officials interested in learning more about the mark Fred left on sustainable agricultural practices, as well as the many ways in which farming impacts the health of the communities they serve.

Fred’s message at the close of his remarks was classic Fred. There is still much work to do and the only way to tackle it is through new connections, cooperation, and community. Three words that sum up a life’s work well done and also capture, succinctly, why we traveled to Iowa.